One of the popular characters to show up on the party for a male strippers is a policeman. So they usually have real police costume and when they appear at the event they are often mistaken for real ones!

Often protagonists, the persons for whom the stripper was called are accidentally handcuffed to placeman strippers, while real police officers are thought to be strip dancers, so that some of party people try to rip their shirts off!

You can see some examples in the movies, namely in the latest “Magic Mike” when the visit two male strippers in police uniform was taken for real check up because of the noise and underage drinking

And in the remake of The In Laws, FBI agents show up in the middle of the alcohol-fuelled bachelorette party and are temporarily mistaken for strippers.

Also in real life, a male stripper in England with a nickname “Sgt. Eros” was once accused of impersonating a police officer and breaching the peace because he had a real police truncheon, as reported by BBC news. But all charges were declined bt the Court of Appeal and the stripper was allowed to use real truncheon in his performance!

One of the Friskydances’ strippers Alex uses police costume in the dance, he had real handcuffs and plays with a dark toy pistol. He do not have usual truncheon but he shows you another one, which is really big! 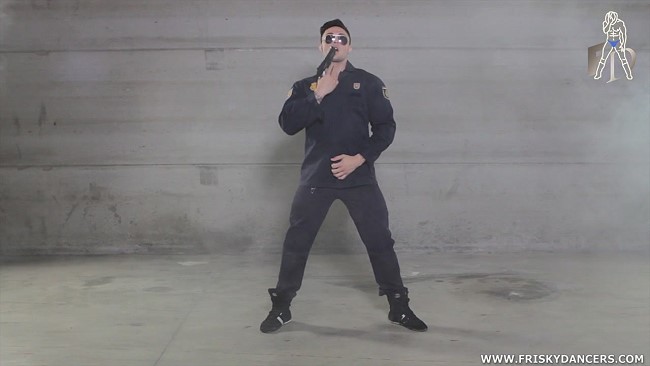